Detached home prices return to 2017 levels, while condos rise to a new record

Detached home prices rise to two year highs: The average sales price for a detached home in the GTA was $1,050,421 in September – an increase of 4% from last year, and at its highest level since June 2017. This was the strongest year over year increase in prices in over two years. Prices of detached homes have fallen in 18 of the last 26 months, so to witness a strong recovery is a nice change of pace. Sales volumes of detached homes surged 28% from a year ago. This dramatic increase is largely due to the fact that the comparison to last year is a relatively easy one as volumes were near multiyear lows in 2018. However, this oversimplifies the situation, as volumes were also higher than historical levels for this time of the year.

Condo prices hit a new record: The price for an average condo in the GTA was $595,013 which is a new record, and up 4% from a year ago. Not surprisingly, condo prices have continued to show strength, given relative affordability. Overall, the GTA housing market has been showing strong signs of recovery for months now, and we see signs that the momentum will continue. A key reason is psychology, as buyers are more confident that prices are stabilizing (or more accurately, that prices are not falling) before purchasing. The market has been displaying increasing stability since the Spring.

Inventory levels have been falling as sales volumes have been rising. Detached home inventory in the GTA stood at 3.1 months of sales – the lowest it’s been in 18 months – and is showing signs of a balanced market.

Condos on the other hand remain in tight supply, currently at 1.7 months of sales. Furthermore, the ratio of sales to new listings (which measures the volume of homes sold against the number of homes being listed) has been averaging around 65% over the past 6 months indicating a lack of supply is keeping the condo market in a sellers’ market. Until demand wanes and/or more listings hit the market, we would expect condo prices to continue climbing. Fundamental drivers sustaining condo demand include population growth, relative affordability compared to other housing forms, demographics and lifestyle choices. .

Exhibit 1:Is it a Buyers, Sellers or Balanced Market? That Depends on What and Where 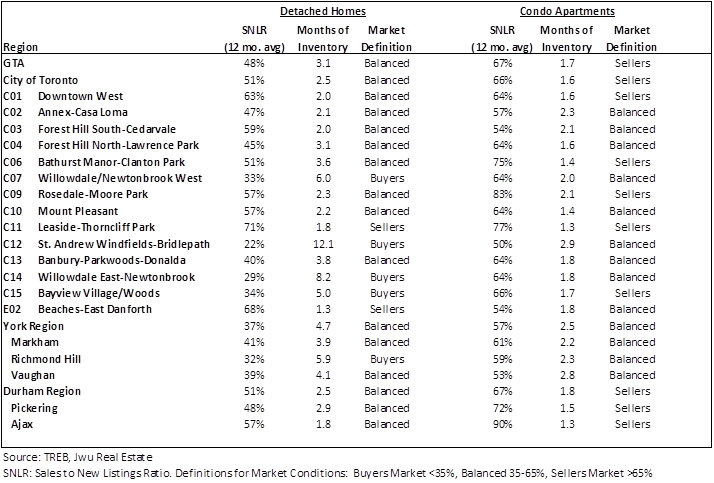 In our last months’ writing, we spoke to the growth of the city’s population, which grew by approximately 106,000 (GTA) in 2018 driven by immigration and inter-provincial migration. This combined with the growth of international students (largely post secondary) of some 168,730 students (we don’t yet have the latest numbers) have put a strain on an otherwise tight housing market.

Despite the growth in population, and despite what we see in the Toronto skyline (i.e. lots of construction cranes) housing starts have actually declined in 2019. From Jan through September of this year, housing starts have totaled 23,949 in Toronto, a decline of 20% a year ago. Single family detached dwellings totaled 3,027, down 38%, while all other housing types (including condos) were down 17%.

Toronto has been facing an affordable housing crisis for some time now and it doesn’t appear to be improving soon. Rising prices, the increase in population, the growth of short term rentals, and the unintended consequences of rent control have caused “street” rents (units that are currently available for lease) to spike in the past two and a half years. The average rent for a 1 BR apartment has exceeded $2,200 per month in Toronto, representing an increase of 35% since 2016.

On the supply side, despite the biggest increase in construction activity of purpose built rental units in decades, it remains insufficient. Completions of new purpose built apartment units totaled 4,300 in Toronto during the 12 month period ending July. A recent RBC analysis indicated there are 6,600 rental units, plus some 53,600 condo units under construction in Toronto. Assuming half of the condo units are used as rentals, this would only represent 15 months worth of rental supply. All of this suggests that rents will remain elevated in the interim and very likely to rise until there is sufficient supply to meet the demand. 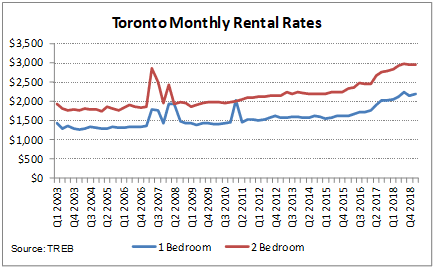 Exhibit 3: Summary of Activity by Region and Property Type -September 2019 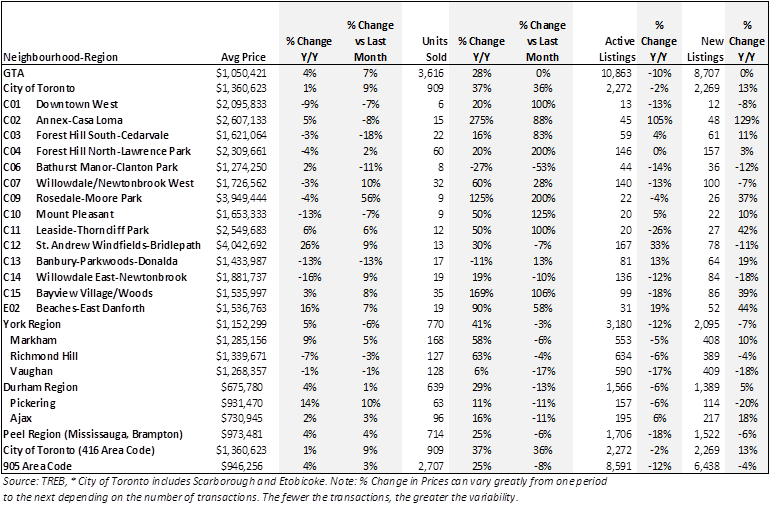 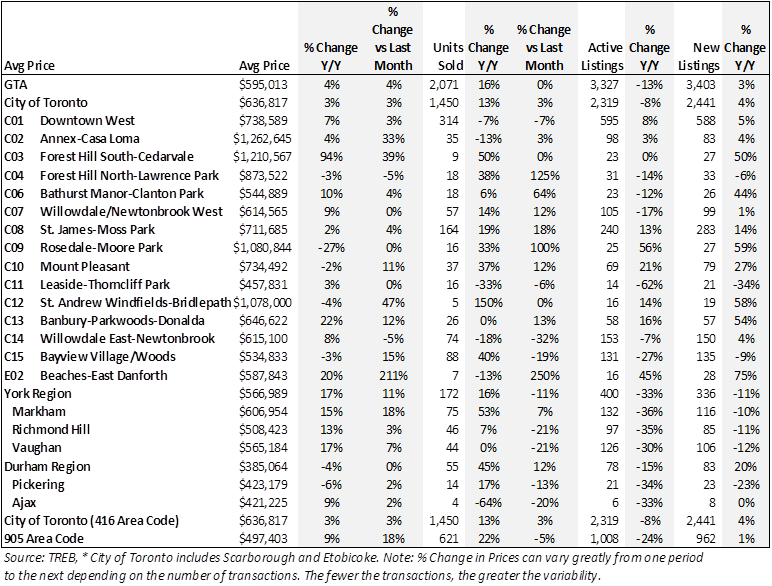