For the past few months, we have been writing about the crazy condo market in Toronto, where bidding wars with 17 or 18 offers has become common place. While that phenomenon has been largely contained within the condo market, we are starting to see it filter into the detached housing market, as the fundamentals of this market have shown remarkable improvement in recent months. Sales volumes have been rising steadily since July of last year. In Exhibit 1, we show how monthly sales volumes (of all home types including condos) have trended compared to their historical average. Following the introduction of the Fair Housing Plan was introduced. This was followed by tighter mortgage rules. For a period of just over two years, sales volumes trended below their historical average, and prices declined for a short period between late 2017 and mid 2018. If not for the strength of the condo market, we believe overall prices could have fallen further and for a longer period. In recent months, sales have started to rise above historical seasonal levels and this has been driving prices higher. As we’ve noted in past writings, most of the price growth has occurred in the condo market. However, in recent months detached housing has seen notable improvement. Improvements have occurred across the board, particularly areas outside of the core 416 such as York, Peel and Durham Regions. 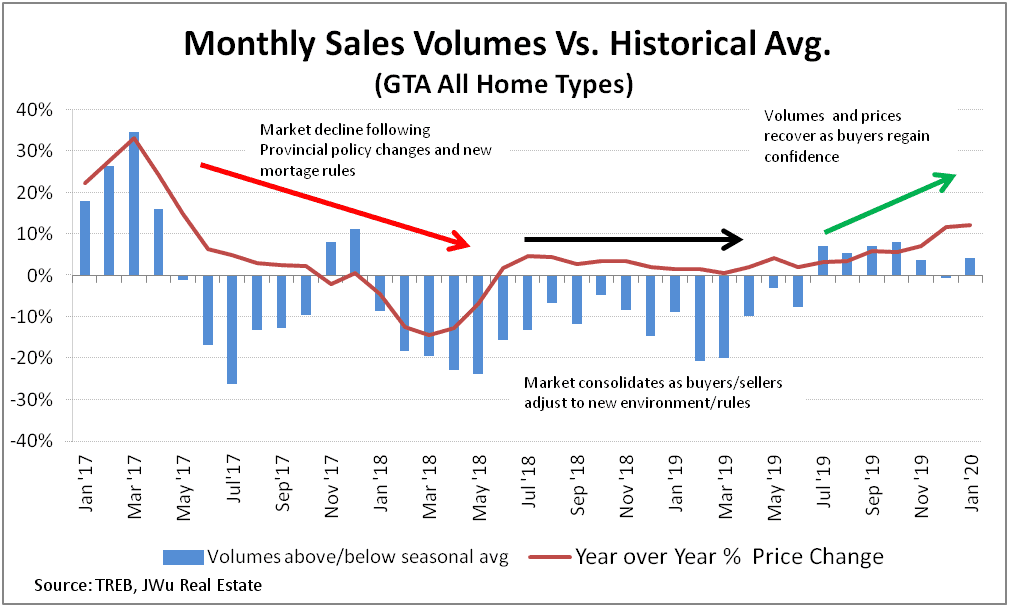 For the most part, the recovery has been steady, but recent stories such as the buyer who paid $1 million above asking for a house in Roncesvalles or the home in Brampton that received 77 offers, show that the market may be experiencing irrational and excessive behaviour akin to 2016-17. This would neither healthy nor sustainable.

Overall, average transaction prices were up 10.3% from a year ago for all home types in January. This was due in part to a relatively easy comparison, given the weakness last year but also points to improving data points as discussed. The average detached home in the GTA sold for $1.038 million, while the average condo sold for $630k. These were all double digit percentage increases from last year.

Exhibit 2: New Listings are at an 8 Year Low 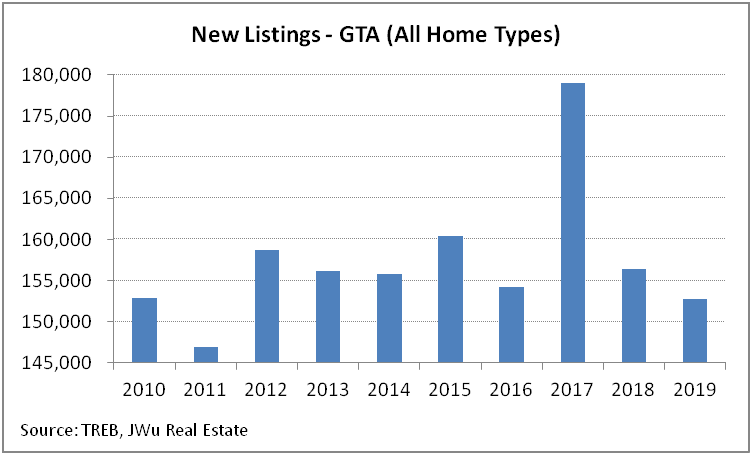 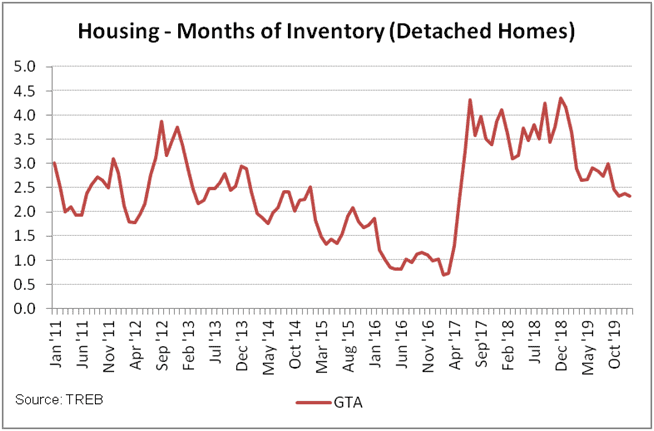 A trend we’ve been hearing more about recently is the rising cost of insurance. While this also pertains to individual condo owners, the big impact is centered more on commercial insurance policies for condo corporations used to insure common elements and structure. Due to an unprecedented increase in claims for severe weather events natural disasters (flooding for example) and the rising costs of repair/replacement, many insurance companies are no longer providing coverage for condo corporations. Thus, the pool of insurers still offering coverage are raising premiums significantly.

This is likely a cyclical event, and should eventually reverse – as premiums rise, profit margins will rise for insurance companies attracting new participants which will push prices down over time. Nevertheless, the consequence is that condo maintenance fees are likely to rise in the near term to offset the rising premiums. The proper management of condo corporations and the proper upkeep of building structure will come more into focus than ever before, as the risk of refused insurance coverage will rise for poorly managed or maintained buildings.

After much criticism from mortgage and real estate professionals, the Federal government is looking to ease its stress test which was introduced in 2016 and expanded in 2018. The current stress test requires borrowers to qualify at a rate 200 basis points (2.0%) above the Bank of Canada posted rate which is currently 5.19%. This effectively slashed the amount borrowers could qualify by up to 20%. The new proposal would require borrowers to qualify at 200 basis points above the median five year fixed insured mortgage rate which currently stands at 4.89% (it takes policy makers to complicate matters!). In any case, it’s a marginal tweak which would increase current borrowing capacity by about 3% for most borrowers.

Will this have an impact on an already hot GTA housing market? Possibly. It will likely have a bigger effect on condos and properties with lower price points, as the buyers for these property segments would benefit the most from or utilize the changes.

The whole problem with the stress test and big policy decisions to begin with is that they are a blunt instrument. That is, they affect everyone in the country, when the policy was likely targeted to specific markets like the GTA, Vancouver, Montreal and Ottawa. So for would-be buyers in secondary and tertiary markets, understandably the stress tests were somewhat unfair. Nevertheless, sometimes buyers need to be saved from themselves, and the concern is that relaxing the rules could create another frenzy in a market that is already starting to overheat.

Exhibit 4: Summary of Activity by Region and Property Type – January 2020 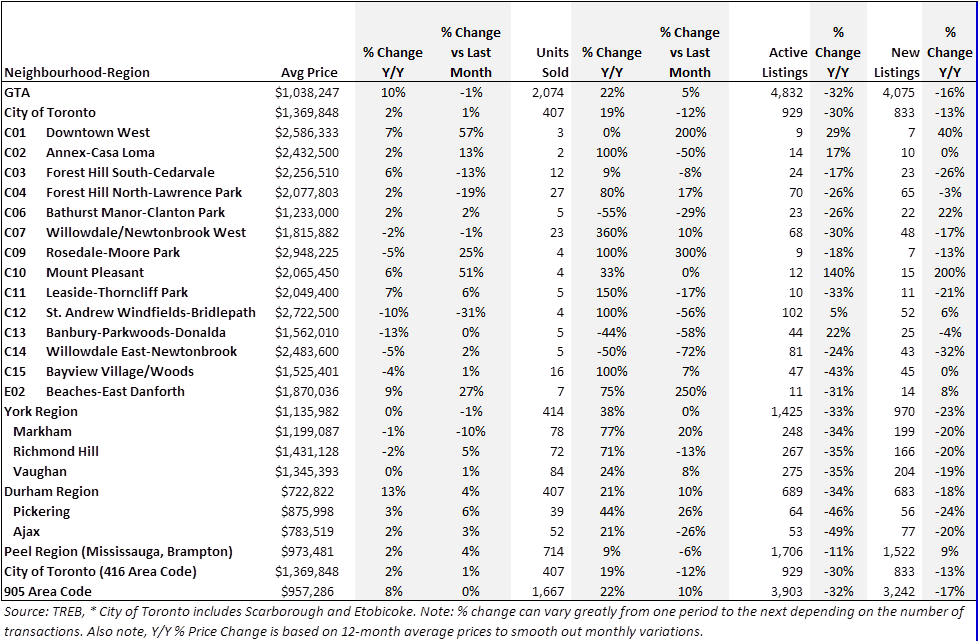 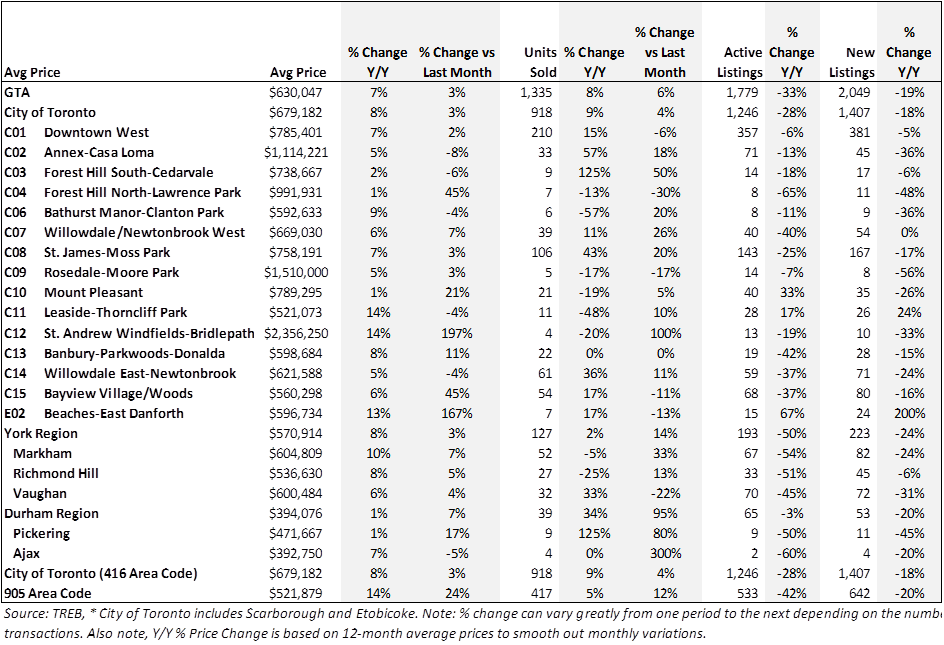