Real Estate Markets Take A Shock to the System

We hope that you and your family are keeping healthy and safe during this unusual and unprecedented time. Like many of you, we have spent the past month focusing on our family and health (as well as all of the household projects that have been neglected for so long!). It’s times like these that make us reflect on all the things that we should be grateful for and often take for granted. It’s also a good time to show our gratitude to all of those out there on the front lines supporting and helping our communities including all the healthcare professionals, essential retail and supply chain workers. As we all do our part to help reduce the spread of this nasty virus, we increase the likelihood that things get back to normal sooner – cheers to that!

Up until the Province announced a State of Emergency and ordered the shutdown of non-essential businesses and services, the Toronto real estate market was well on its way for a very strong year. As illustrated in Exhibit 1, the week to week change in the Toronto market is quite stark with a dramatic falloff in sales volumes as the weeks progressed through March and April. This makes complete sense, as the shutdowns and social distancing measures have severely reduced the number of booked showings, which are down approximately 80% from this time last month.

However, despite this, prices haven’t changed materially. Whether this will change depends on the length of the shutdown and severity of its impact on the economy. And when we say severity, we are implying longer term structural damage to the economy such as credit defaults and widespread, permanent job losses. At this point, it is premature to make that call. 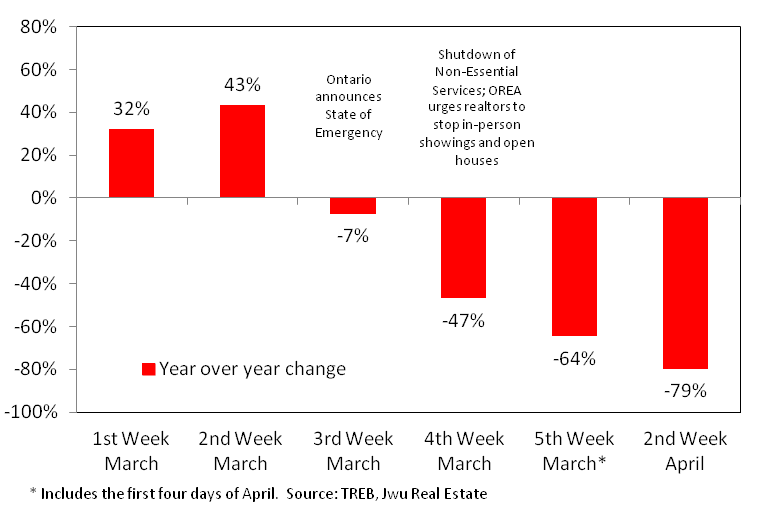 Another factor will be the impact of inventory and the ensuing return in demand as things go back towards normality. As far as inventory is concerned, we think it’s fair to conclude that most sellers do not want to sell in this environment but were either committed to selling prior to the shutdowns as their properties were already on the market or because they absolutely need to sell. For everyone else, there is no hurry to sell, and this has been confirmed by the very low increase in new listings in recent weeks. As of today’s writing, there were only 3,675 listings in Toronto – a relatively small increase from 3,373 at the end of March. We estimate inventory should be closer to 6,000 listings at this time of the year, meaning we are around 40% below normal levels.

Having said this, given the recent events we see the possibility of increased listings particularly of condos coming to the market. These could come from small landlords who no longer want to be landlords or from AirBnB units which have taken a beating in the past couple of months – first following new rules and by-law changes and now the impact of COVID-19.

As for demand, at this point, we would surmise that buyers are largely sitting on the sidelines until things stabilize – this is mostly anecdotal based on what our client base and those of our colleagues are telling us. Intentions remain unchanged but the reality is that most buyers want to physically see properties before they purchase, and while showings are allowed in many instances, many don’t feel comfortable or safe doing it. There are also concerns that job losses will have an impact on the market. However, we believe that most of the part time and gig workers that have lost jobs and/or income (as harsh as it may sound) were largely not in a position to be purchasers in a relatively expensive Toronto real estate market to begin with. For buyers with means, as has been the case in past periods of uncertainty, opportunities will likely present themselves in the coming months.

So here are the numbers for March…

Overall, sales volumes in the month of March were up 11.5% in the GTA and 8.9% in the City of Toronto compared to last year (for all home types). As discussed previously, if not for the shutdowns, the numbers would have been higher. Average sales prices increased 14.5% in the GTA, and 19% for Toronto.

Detached home sales continued to rebound after a couple years of softer sales volumes. In the GTA, there were 3,760 detached home sales, an increase of 16% from last year, while prices had their strongest year over year increase in 25 months with a rise of 4.4%. The trends were similar in the City of Toronto, with volumes rising 17% and prices up 4.5%.

Condo sales had flattish sales numbers in March with a year over year increase in sales volume of just 2.5% in the GTA and 3.9% in Toronto from last year. We think this has more to do with lack of inventory than any material change in demand. Condo inventory stood at just 1.4 months of sales – its lowest level on this metric since November 2017. Average sales prices rose 18% from a year ago, pointing to a tight and competitive market.

Looking ahead, sales volumes will likely drop 70-80% in April and similarly in May (depending on when the economy re-opens). It’s hard to say for sure what prices will do. From what we have seen to date, prices are holding and appear to be relatively consistent with prior transactions. We do think there could a slight downward bias, as motivated sellers accept lower prices, but given relatively thin inventory and a lack of new listings, at this point, it doesn’t appear this trend will be widespread.

Exhibit 2: Summary of Activity by Region and Property Type – March 2020* 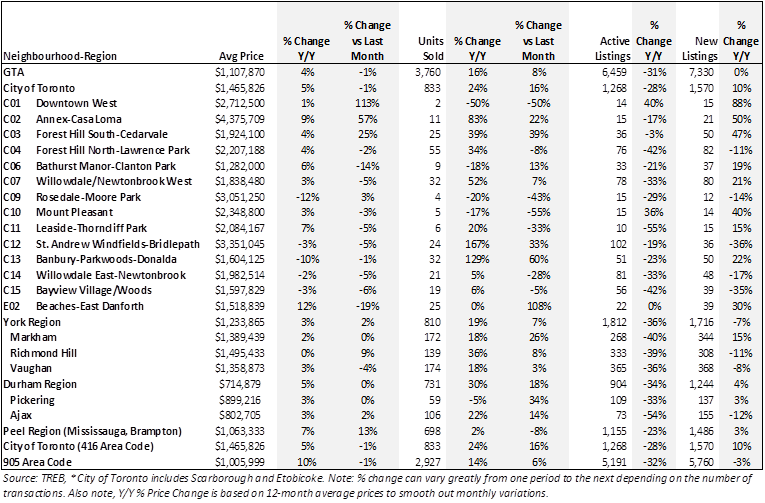 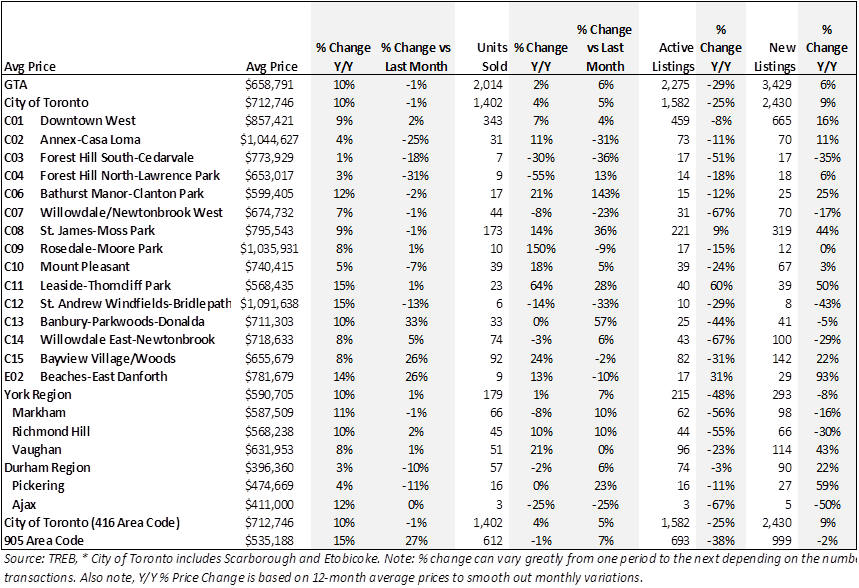 For more charts and data on prices, please access our report in pdf form here.

Take care and be well!