With Spring upon us, April sales showed continued signs of life. Average transaction prices for the GTA rose 2% from a year ago, and 4% from last month. This was the 11th consecutive month of year over year price gains. In Toronto, average transaction prices (for all home types) were up 4% from last year and up 9% from last month. Volumes also showed a solid rebound with transactions rising 16.8% year over year for the GTA, and 9.8% in Toronto. Keep in mind, that it was a relatively easy comparison, as April 2018 was a pretty weak month, and despite the improvement, volumes are still well below historical averages for this time of the year. In addition, some of the strength could be the result of pent-up demand due to the slow start this year. Nonetheless, April was the highest volume month in nearly two years which is encouraging given how anemic volumes have been lately. 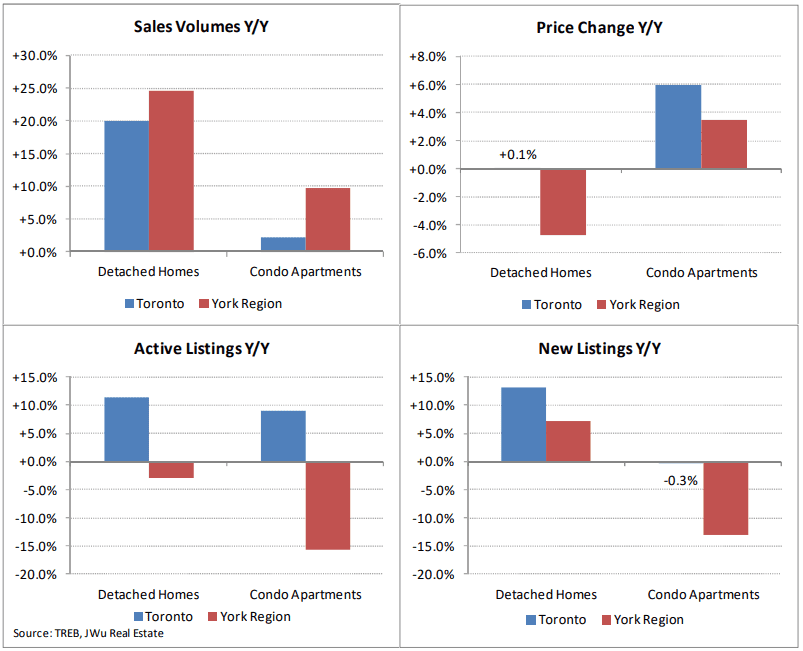 After dropping 18 of the past 22 months, the higher end of the market showed renewed strength with sales at their highest level in nearly two years 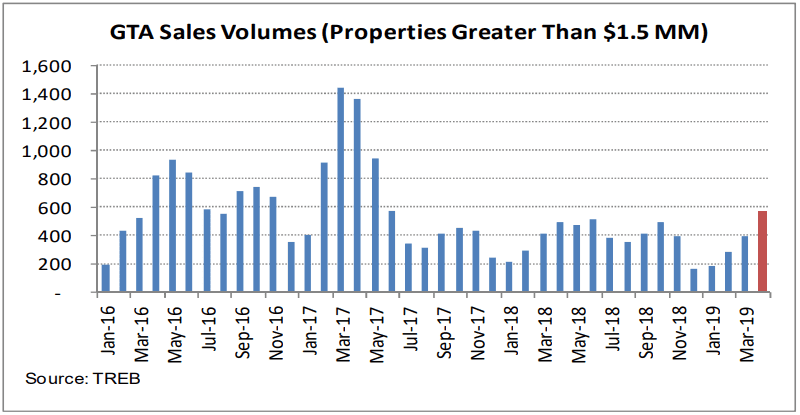 Is The Condo Market Showing Signs of Normalization?

The Toronto condo market has been incredibly resilient and a positive in an otherwise challenging market. Average sales prices for condos have risen 10.2% in the past year in Toronto, and up 65% over the past 5 years. That’s a compounded annual growth rate (CAGR) of 10.6%! This represents very significant growth in equity for condo owners. So, with prices rising to over $1,000 per square foot in core locations (such as King West), is this market starting to experience fatigue? Indeed, there is a case for both sides of this argument. On the one hand, condos will likely remain the housing choice for many given relative affordability, convenience, lifestyle preference and availability. They are also the property choice for most small real estate investors given the turn key nature of the investment and relative ease of managing.

On the other side of the argument, valuations continue to rise such that the gap between condos and other housing alternatives (such as detached homes) has narrowed and could give buyers more options. For example an 800 sqft 2-BR condo downtown could easily set you back $800k-$1 mm. For the same budget, one could purchase a starter home north of the city and with a backyard to boot! Clearly, this won’t appeal to everyone, but the value proposition is there for those willing. 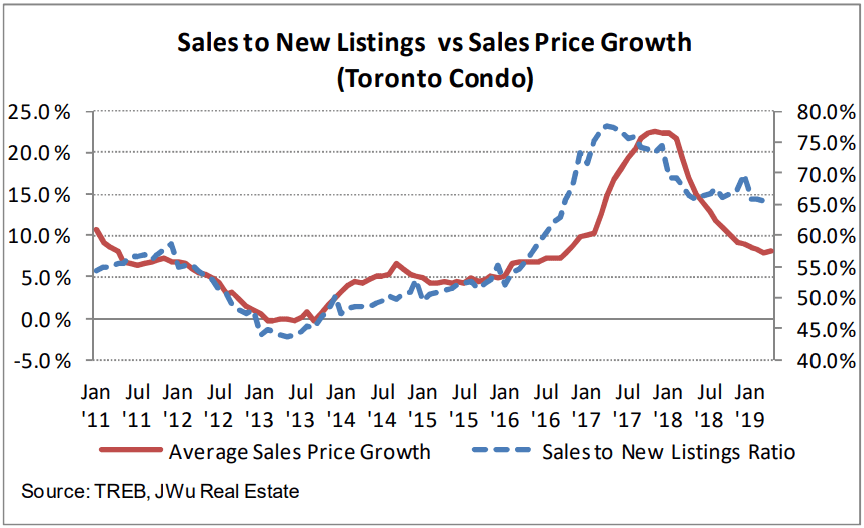 The price growth of condos has slowed from the torrid pace of 2017 and early 2018, averaging 8.1% over the past twelve months compared to 17.5% in the twelve months preceding, and 14.6% in the year before that. What had been a very tight market has started to show some normalization. While sales were up 6% in April, they are down 7.5% in the past 12 months. Concurrently, inventories have more than kept pace with the sales trend – the sales to new listings ratio over the past twelve months has fallen to 65% from its peak 77% in 2017 – the higher the number, the tighter the market. Months of inventory is still tight at 1.7 months but now sit at their highest level in more than 2 years (since December 2016). Still, these numbers point to a market that remains tight and we expect continued price growth in the Toronto condo market, but likely at a more sustainable pace.

Exhibit 4: Summary of Activity by Region and Property Type – April 2019 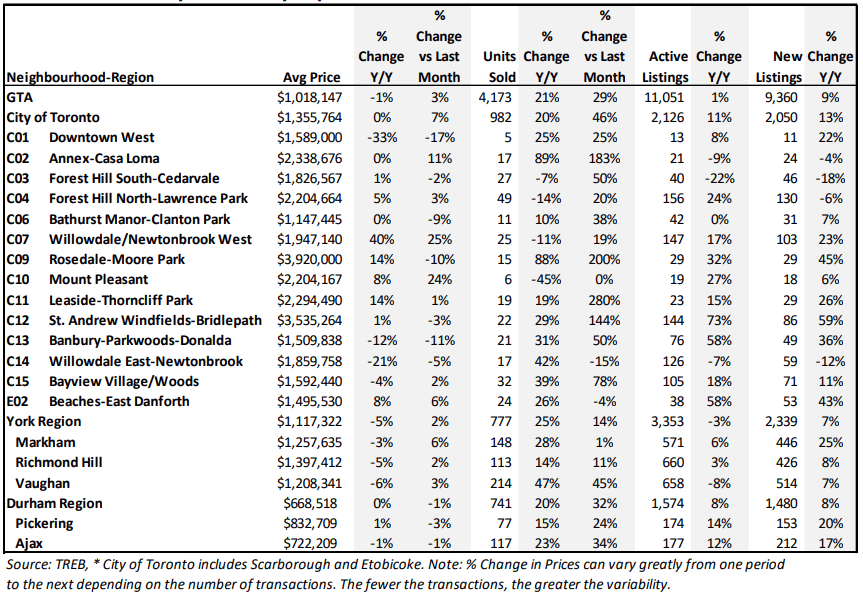 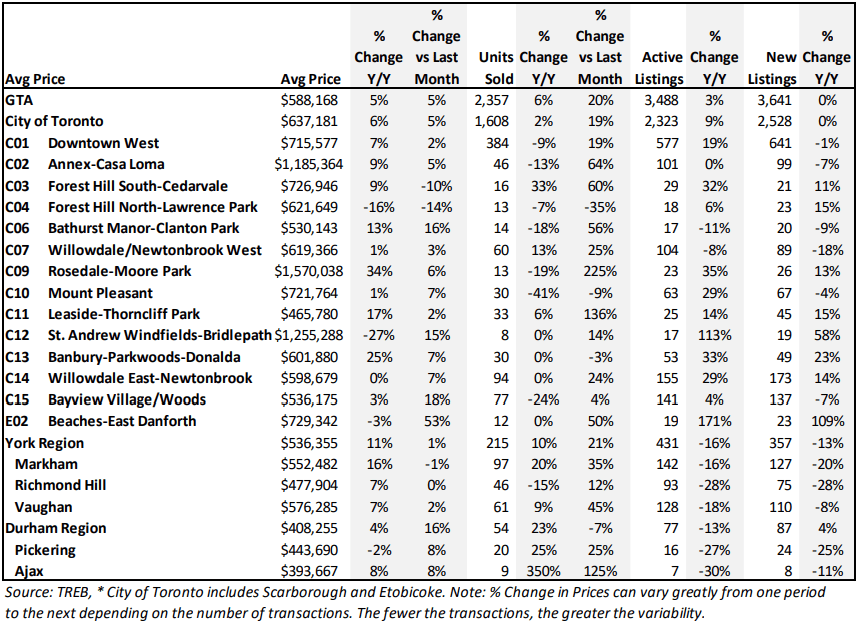 As always, feel free to contact us if you have any questions regarding the contents of this update or about the market in general.